From early Anglo-Saxon times the shilling was a unit of account, that is to say, a value used in calculations which had no corresponding coin. Its value became established as equivalent to 12 pence and there were 20 shillings to the pound.

The shilling as a coin was introduced at the beginning of the 16th century during the last years of the reign of Henry VII and until the middle of that century was known as a testoon. It was one of the first English coins to bear a real portrait of the monarch instead of the representative portrait which had served for the previous ten centuries; and it was for this reason that it derived its name of testoon from the Italian Testone or Headpiece introduced in Milan in 1474.

Convenient in size and value, the shilling became one of the popular workhorses of the silver circulation. Colloquially described for some unknown reason as a bob, it was not superseded until 1968, during the preparations for decimalisation, when issues began of the new 5p piece. Even then, being the exact decimal equivalent of 5p, they continued to circulate alongside 5p pieces until 1990, when they were finally demonetised.

Requiem for the shilling

‘You will never know how good a thing the shilling is until you lose it.’

Thus some 100 years ago wrote F A Halsey of the American Institute of Weights and Measures, attempting to refute the arguments of those who favoured a decimal system of coinage. The shilling was, he thought, ‘the most wonderful denominator of value in the world’, but despite such advocacy decimalisation came in due time to assume an air of inevitability. And in February 1971 the United Kingdom at last changed over to a decimal system. 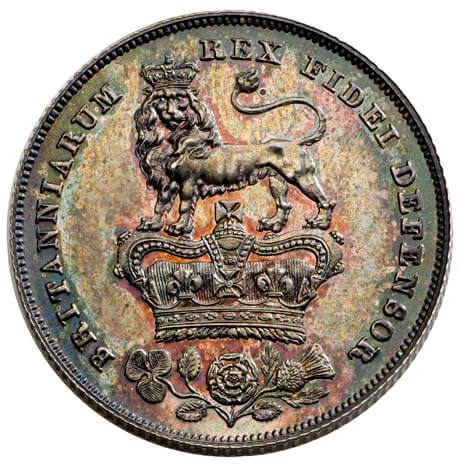 The shilling, however, in a real sense managed to survive decimalisation since, under the system eventually adopted, it had an exact counterpart in the 5p piece. For this new decimal coin, the weight and diameter of the old shilling were retained, and existing shillings were allowed to remain in circulation, those dating back to 1816 being re-denominated as 5p pieces. With the introduction of the small 5p piece in the summer of 1990 and the demonetisation of all earlier 5p coins from the end of December 1990, the shilling finally reached the end of its active life. 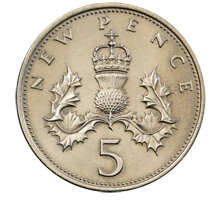 Although the shilling was superseded in 1968 by the new decimal 5p piece, shillings remained in circulation as 5p pieces until 31 December 1990

Popularity of the shilling

Whether some mysterious, unexpected truth will be discovered in the words of F. A. Halsey remains to be seen, though certainly there can be no question that the shilling has long been a very popular coin. In 1730, for instance, the Master of the Royal Mint wrote that, of the silver coins, shillings and sixpences were of the greatest use. A later Master, the distinguished chemist Thomas Graham, went even further, suggesting that the silver coinage could well be made up of shillings and sixpences alone. And that same year, 1859, the shilling was described by the Secretary of the Decimal Coinage Commission as the most important of the silver coins. 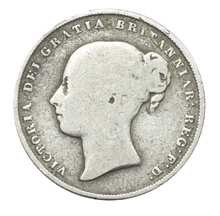 More shillings, indeed, were struck in the 19th century than any other silver denomination. In the years immediately before decimalisation in 1971 the shilling yielded pride of place to the sixpence but it remained a coin much in demand, with something like 1000 million in circulation as D-Day (Decimal Day) approached.

The difficulty lay in getting all these coins to circulate freely. One of the features of pre-decimal coinage was each winter the perennial shortage of shillings as large numbers became locked up in gas and electricity meters. The special steps which were taken to encourage the circulation of shillings were not wholly successful and there was, possibly, more than a grain of truth in the complaint of a member of the public to The Times in 1935 that ‘not only shops but banks seem reluctant to produce them; a pound of silver is taken to mean eight half-crowns or 10 florins’. On its side the Royal Mint continued to echo the words of the Chancellor of the Exchequer in 1891 that the only reason why shillings were not more fully in circulation was that people did not ask for them.

Affection for the shilling

Like the gold sovereign, the shilling was a coin capable of generating an emotional attachment. Its regular appearance in literature, its placing under ships’ masts as a talisman for good luck, its use as the King’s Shilling to confirm military recruitment, all speak for a special popularity. A warm affection, too, may be sensed in the nickname bob, even if the origin of that familiar name remains obscure. Some have tried to link it to the names of famous statesmen, the favoured candidates being Sir Robert Walpole and Sir Robert Peel, but there is more than a suspicion that it stems from something rather less exotic. Court proceedings by the 1820s show it to have been well established in the underground slang of counterfeiters and utterers but there seems as yet to be no earlier reference than one of 1812. 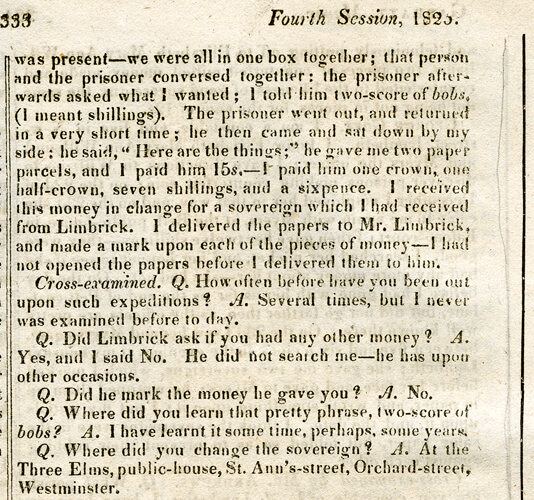 The shilling itself can claim a much longer history than this. The first silver shillings, known then as testoons, were struck about 1504 for Henry VII. Extremely rare, they are of the nature of experimental or presentation pieces and it was not until the 1540s that testoons became a permanent part of the circulating coinage, a product of the debasement of the coinage by Henry VIII. Showing an unflattering full-face portrait of the king, the new 12 pence coins, three times the value of the popular groat, were of real advantage to Henry at a time when he needed money as quickly as possible. Nevertheless, the denomination found a regular place in circulation and under a different name, shilling, minting continued after the restoration of the coinage. 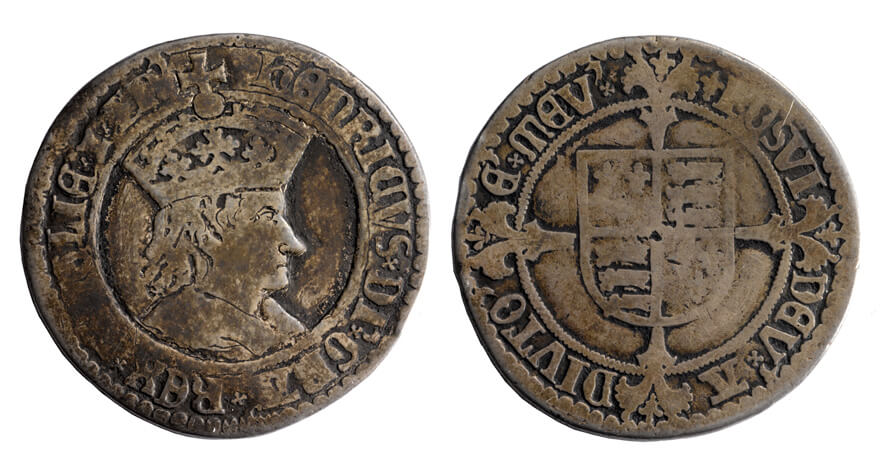 Henry VII testoon. The profile portrait contrasts sharply with the stylised representation of the monarch which characterised medieval coinage

As a unit of account the shilling goes back much further than Tudor England. The mathematician Robert Record, in a description of the British currency published in 1543, explained that ‘of the two most common values of money spake I nothing, that is to say, of pounds and shillings, which though they have no coins yet is there no name more in use than they’. 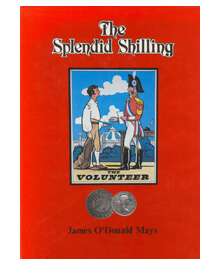 The shilling has commanded a book to itself: The Splendid Shilling by James O’Donald Mays, published in 1982

It is a comment which occasions no surprise since, as a means of reckoning the value of land, goods and services, the shilling can be traced back to the Domesday Book and even beyond this to Anglo-Saxon England. In fact, there are small gold coins of the seventh century, previously known as thrymsas or tremisses, which are now recognised as shillings. Their value, however, in those very early days is not entirely clear, for there appear to be shillings of four, five and 12 pence. It was the Normans who standardised the value at 12 pence soon after the Conquest of 1066, when the libra of 20 solidi and the solidus of 12 denarii became the official units of account. 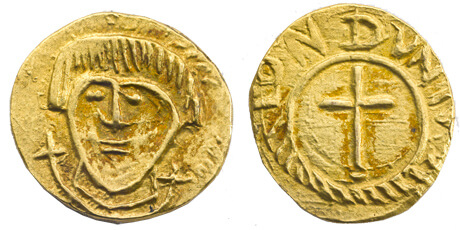 This modern electrotype copy of an Anglo-Saxon gold shilling bears the name of London on its reverse. The original coin is in the Ashmolean Museum

The shilling, then, has been for more than 1000 years a part of the British currency system, both as a unit of account and as an actual coin. 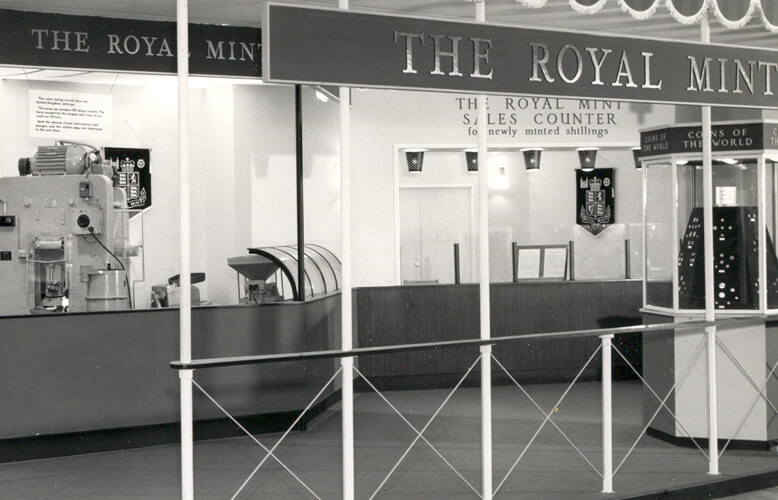 Ideal Home Exhibition, 1963. To provide additional supplies of an elusive coin, newly-minted shillings were sold at the Royal Mint stand