The pre-decimal currency system consisted of a pound of 20 shillings or 240 pence, though at first there were no coins corresponding in value to the shilling or the pound. Below you can see a breakdown of the British coinage system prior to decimalisation.

The origins of pre-decimal coinage

The custom of reckoning in librae of 20 solidi and 240 denarii grew up in the Frankish kingdom and crossed into England quite early, perhaps in the seventh century. There is evidence that the gold tremissis had become known as a solidus around the western Mediterranean, and the new silver denarius may have been its 12th part.

The first English pennies were struck in silver in the seventh century, but these and subsequent coins varied considerably in weight and it was in practice only occasionally that 240 pennies weighed a pound. With the silver pennies of William I, however, the weight became much more consistent and it is from this time that the pound as a unit of currency of 240 pence has its origin. Not until 1489, during the reign of Henry VII, did a pound coin emerge in the form of a magnificent gold sovereign deliberately intended to convey the strength and majesty of the new Tudor dynasty. Before Henry’s death it had been joined by a silver shilling, destined to become one of the most useful denominations in the English currency.

The name shilling derives from the Old English scilling or scillinga meaning cutting or slice; one of the early moves towards coinage was the recognition of ornaments such as gold or silver armlets as a medium of exchange, and the division of them into sections (cuttings).

The symbols £sd were to become a convenient abbreviation for the pre-decimal system of currency used in Britain up to 1971.

The £ sign developed over the years from the letter L, the initial letter of the Latin word libra meaning a pound of money. 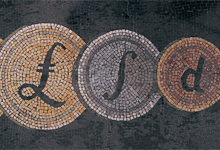 It is not known for certain when the horizontal line or lines, which indicate an abbreviation, first came to be drawn through the L. However, there is in the Bank of England Museum a cheque dated 7 January 1661 with a clearly discernible £ sign. By the time the Bank was founded in 1694 the £ sign was in common use.

In the case of the letters s and d it is generally agreed that these stand for the Latin words solidus and denarius, originally Roman. The first use of these abbreviations to indicate shillings and pence given in the Oxford English Dictionary is dated 1387. It seems safe, therefore, to assume that in medieval times, when Latin and English were both in constant use, these two symbols came to be applied to the English shillings and pence as their Latin counterparts became obsolete.

The origins of the word sterling

Sterling describes the British currency. It is a word that we see in the pages of the financial press and also, for instance, on travellers cheques when we go abroad. But sterling as a word has come to stand not just for the currency but also more generally for laudable qualities such as steadfastness, honour and integrity; yet, for all that it is so much a part of our lives, its derivation is curiously obscure and elusive. 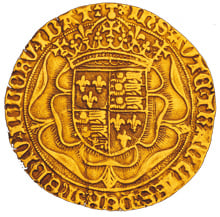 In explaining the origins of the word the numismatist Professor Philip Grierson associated sterling with the Middle English ster, meaning strong, rigid or fixed. And looking to the numismatic evidence, he observed that towards the end of the reign of William I (1066-1087) the penny had become heavier and that, contrary to the variations which had occurred in previous reigns, it had then remained at the same weight for the next two centuries. Consistently uniform at 22.5 grains, this English, or more accurately Norman, penny gained a deserved reputation abroad as a strong and fixed currency; and Professor Grierson demonstrated that the earliest references to sterling pennies in continental documents, all of them significantly post-Conquest, used the word sterling as an adjective in precisely this sense.

As the range of denominations grew with the issue of farthings and halfpennies, half-groats and groats, gold nobles and their fractions, so the name sterling came to represent the English currency as a whole. And if this was especially the case abroad, it was also true at home, for both Chaucer in the 14th century and Shakespeare 200 years later provide instances of sterling being used in this way in a domestic context.

The most distinctive element of the Museum is the collection of some 30,000 master tools and dies.