The penny is the great survivor of the British coinage system. Derived indirectly from the old Roman denarius, it existed as a small silver coin from Anglo-Saxon times. It survived the Norman Conquest of 1066 and continued to be struck for circulation until the middle of the 17th century, 12 pennies making a shilling and 20 shillings a pound.

Because of the rising price of silver the penny became progressively smaller and from the Restoration of Charles II in 1660 it was struck only for use as part of the Royal Maundy. Silver pennies are still struck today for the same purpose, nearly 1400 years after the penny first appeared as a small silver coin. 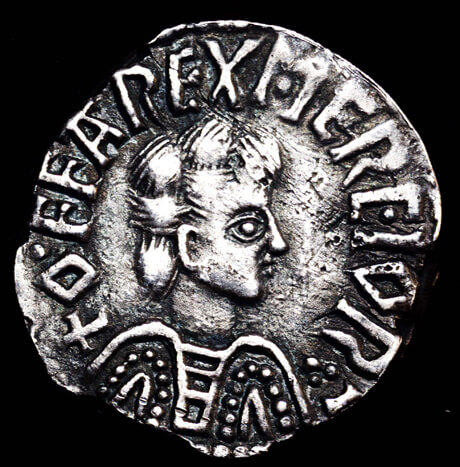 The ‘cartwheel’ penny and the twopence of 1797

Among the pieces most frequently received for examination from members of the public are the large copper pennies and twopences of 1797, known as ‘cartwheels’ because of their huge size.

The two coins bear similar designs. On one side appears the head of George III, facing right and wearing a wreath, together with the words GEORGIUS III.D:G.REX. On the lowest fold of the drapery at the base of the effigy is the initial K, indicating that the design is the work of the German engraver Kuchler. On the other side (also engraved by Kuchler) is shown the seated figure of Britannia, together with the word BRITANNIA and the date 1797. The letters are incuse (or sunk) and have been placed on a broad raised rim in an attempt to prevent undue wear and lessen the risk of counterfeiting.

The coins were not struck by the Royal Mint but by Matthew Boulton at his private Soho Mint in Birmingham, and the name of the mint can, in fact, be seen on the coins just below Britannia’s shield. They were made legal tender for amounts of up to one shilling by a proclamation of 26 July 1797, which also specified that the penny should weigh one ounce and the twopence two ounces. The object of making them so heavy was that their intrinsic value should correspond as nearly as possible to their face value: in other words, their cost of production (copper plus workmanship) was to be a penny in one case and twopence in the other. The diameter of the penny measures 1.4 inches and that of the twopence 1.6 inches.

It is believed that approximately 720,000 twopences and nearly 44,000,000 pennies were issued, all bearing the date 1797. Consequently the penny is a very common piece and the twopence not particularly hard to come by.

The cartwheel pennies of 1797 proved popular and continued to circulate, along with later and slightly lighter copper pennies, until 1860. 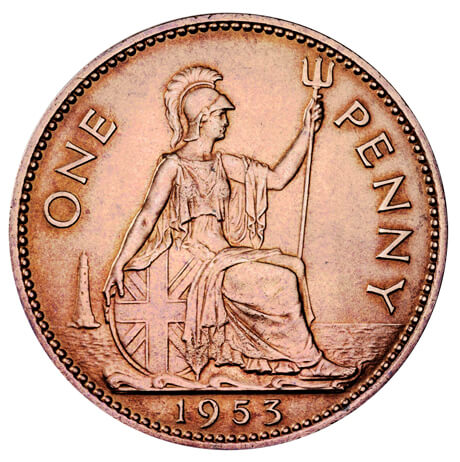 In that year copper pennies were replaced by smaller, thinner and more durable coins in bronze. Originally known as bun pennies from Queen Victoria’s portrait on the obverse, these and later issues of the bronze penny remained in circulation until the time of decimalisation in 1971.

In the form of a new penny it survived decimalisation but with its value changed to one-100th of a pound. At the same time the seated figure of Britannia, which had been a feature of all copper and bronze pennies, was replaced by a crowned portcullis as the symbol of Parliament.

If you have heard of only one rare coin, there is a good chance that it is the 1933 penny.

One of the coins most frequently shown to visitors to the Royal Mint Museum is the Monogram Penny of Alfred the Great, (871-899).

In 1945 the Government of India came under pressure to introduce an extremely small coin.