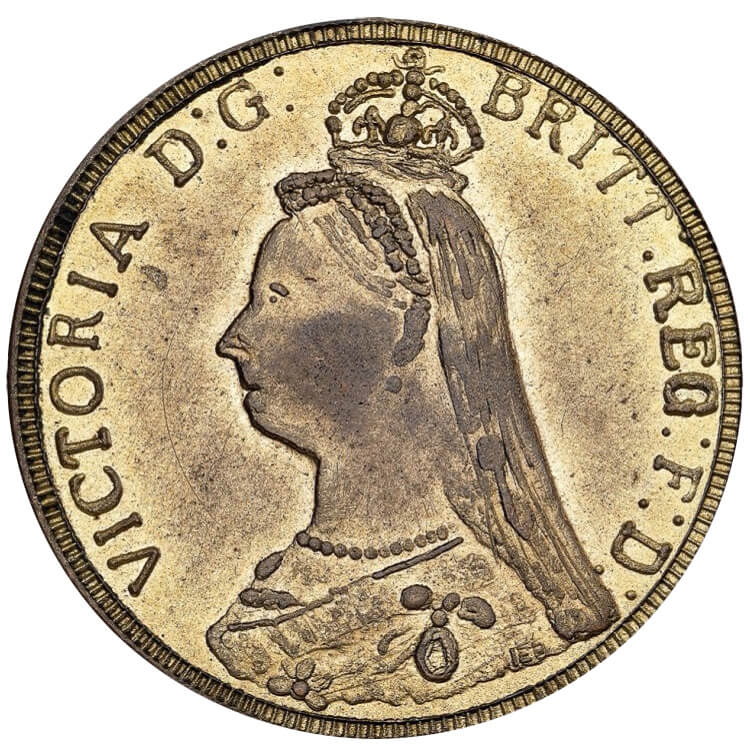 Obverse of a counterfeit 1887 sovereign

For as long as there have been coins there have been counterfeits and here at the Museum we have a particularly fine collection of forged material which goes back as far as the 17th Century. The illegal nature of counterfeiting means that the origins of these objects are almost entirely unknown, but thanks to clues left behind by previous generations and research carried out by Museum staff, a few of their names and stories have been rediscovered.

Our collection contains a pair of counterfeit sovereign dies of 1891 together with a base metal impression struck with those tools in September of that year. A provenance ticket which reads ‘Bronze Impression from counterfeit dies 28/9/91' accompanies the coin. In 1977 the Museum’s Librarian and Curator became curious about the origin of these objects. Using the date from the provenance ticket he searched through The Times newspaper for notable counterfeit cases and was finally able to relate them to the case of Robert Schmidt. 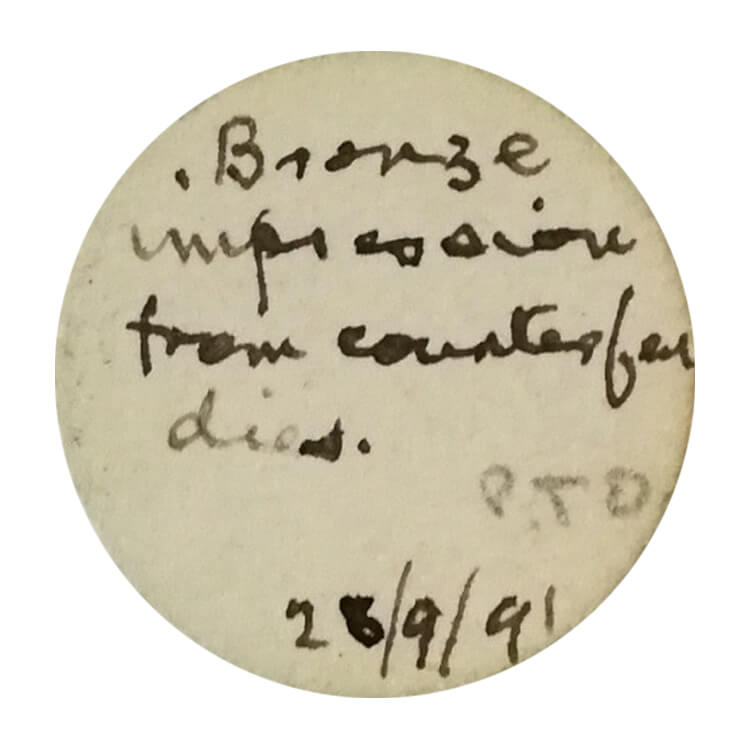 Provenance ticket from 1891 for base metal impression

Schmidt, a 30 year old German living in Islington, planned to use a mixture of genuine and counterfeit sovereigns to set up in business as a furrier. He was not a professional counterfeiter but had contacts in the form of ‘several friends’ who assured him that they had been making counterfeit 20 mark coins for years but had not been caught.

On 11 May 1891 Schmidt approached Emile Schrier, a die-sinker who worked for the Bank of England. He requested that Schrier make him some coinage dies, but the die-sinker was an honest man. After hearing the would-be criminal’s proposal, he informed the Bank of England and the Treasury, who advised him to complete the job and set up his ‘client’ 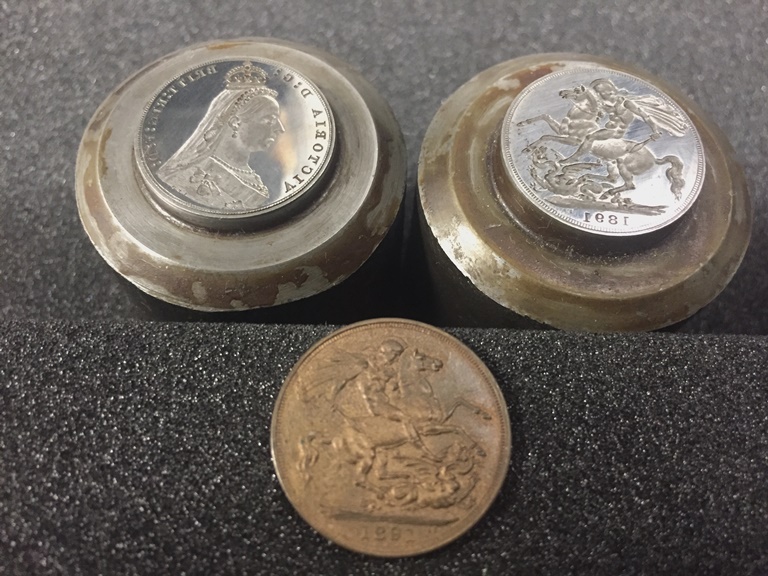 On 5 September the unfortunate Schmidt was arrested as he left the die-sinker’s office with the dies wrapped in a brown paper parcel. Old Bailey records show that William Webster, the Treasury’s appointed Inspector of Coin, presented both the counterfeit dies and the specimens struck from them at Schmidt’s trial, which gives these objects additional provenance. Ultimately the Court found Schmidt guilty and he was sentenced to six years of penal servitude.

In direct contrast to the previous story, the next case begins with two names but no date. A small sovereign punch from the Museum’s collection is stored alongside an enigmatic note in an unknown hand which reads ‘Two men named Buckley and Andrews were arrested while working on this punch and were afterwards executed. Theirs was the last execution for forgery.’ With this scrap of information, and the recollections of our Senior Research Curator, it has been possible to piece together the tale of the Vauxhall Road Coiners, Daniel and Mary Ann Buckley, Jeremiah Andrews, Shadrach Walker, Daniel Pycroft and Mary Ann Patrick.

In the autumn of 1826 the illegal coiners were the subject of a stake-out. They were seen acting suspiciously, loading and unloading carts and bringing extremely heavy baskets to various locations around London. On 23 December police officers raided houses in Vauxhall, Newington and Greenwich to find an array of coining tools and thousands of counterfeit coins. It was suggested, based on the amount of evidence uncovered, that their weekly circulation of counterfeit money amounted to approximately 100 pounds, the equivalent of approximately £9,000 today. Needless to say the entire gang was arrested immediately. Andrews and Buckley were taken to one of London’s prison ships, the Port Mahon, to await trial. Buckley protested that they had only intended to carry on their coining operations for another three months had they not been discovered but he already knew what his fate would be. He asked the Principal Officer of the prison ship where he would die and told him that he had already bought a coffin.

At the trial in 1827 three of the men -Pycroft, Buckley and Andrews- were tried for high treason. Pycroft was the only one to call a character witness and it must have worked on the sympathies of the jury as he was acquitted. Buckley and Andrews, however, were found guilty and sentenced to death. Walker is recorded as having turned on the gang and given evidence against them, which is probably why he did not appear in the dock. 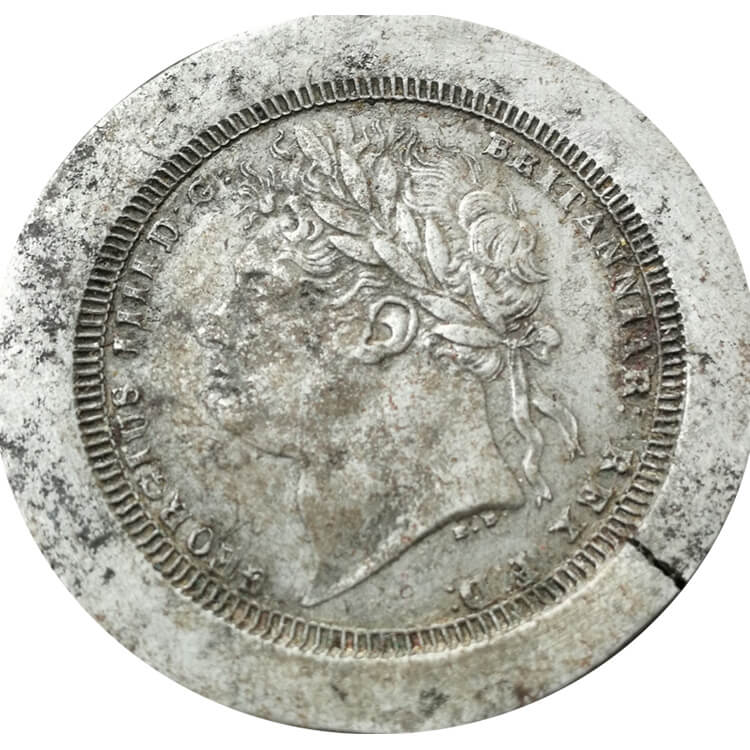 Counterfeit punch made by the Vauxhall Coiners

At the discretion of the Mint, the women were only charged with the misdemeanour of having procured 500 pieces of counterfeit money with the intent to ‘utter’ or pass them off as genuine coins. Daniel’s wife Mary Ann Buckley was acquitted but Mary Ann Patrick was not so lucky. She was sentenced to six months hard labour. Despite petitions made by Buckley, Andrews and their families for Parliament to overturn their sentences, the two men were executed on 23 April 1827.

A key figure in the history of the Royal Mint.