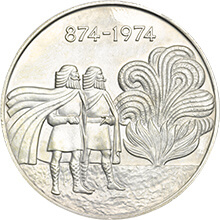 The origins of Iceland’s long-standing relationship with the Royal Mint may be found in the disjointed conditions of the Second World War. Being united to Denmark, Iceland had previously turned to the Copenhagen Mint for its coinage requirements but the fall of Denmark into enemy hands required the authorities in Reykjavic to look elsewhere. Thus it was that in 1940 the Royal Mint received an order for the five denominations from one eyrir to 25 aurar, soon to be followed by additional orders for króna and 2 krónur coins.

Striking at the Royal Mint commenced after a night during which the windows and roofs had been wrecked by enemy action so, as the Deputy Master put it in his Annual Report, ‘a glacial wind whirled round the coining presses to inaugurate this coinage of Iceland’. The war, indeed, would present further challenges; with nickel in extremely high demand for munitions, it became necessary to strike the 1942-dated 10 and 25 aurar coins in the unsuitable metal of zinc rather than cupro-nickel.

With the establishment of the Republic, a new series of designs was introduced in 1946 which remained in use for the next 35 years. A full rendering of the national Coat of Arms appears on the króna and 2 krónur, complete with the bull, eagle, dragon and giant supporters. Four new denominations were added in the late 1960s – 50 aurar, 5 krónur, 10 krónur and 50 krónur. The latter bears a representation of the Althing or Parliament building and in the first year of issue, 1968, it carried an inscription marking the 50th anniversary of the achievement of sovereignty.

A commemorative coin for Iceland was first struck at the Royal Mint in 1961 – a gold 500 krónur marking the 150th anniversary of the birth of the scholar and statesman, Jón Sigurdsson. This was followed in 1974 by a remarkable series of three gold and silver coins, designed by Throstur Magnusson, commemorating the 1100th anniversary of the settlement of Iceland.

When a major reform of the coinage in the early 1980s resulted in a complete re-design of the circulating pieces, the new obverses were all taken from Magnusson’s highly distinctive treatment. A variety of aquatic life was portrayed on the reverse, including dolphins, cod and northern shrimp. 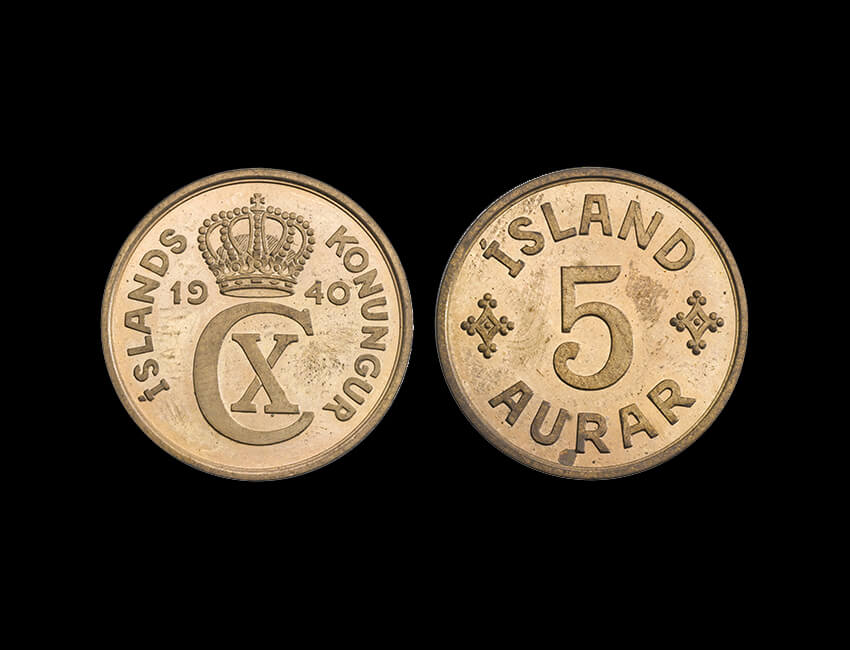 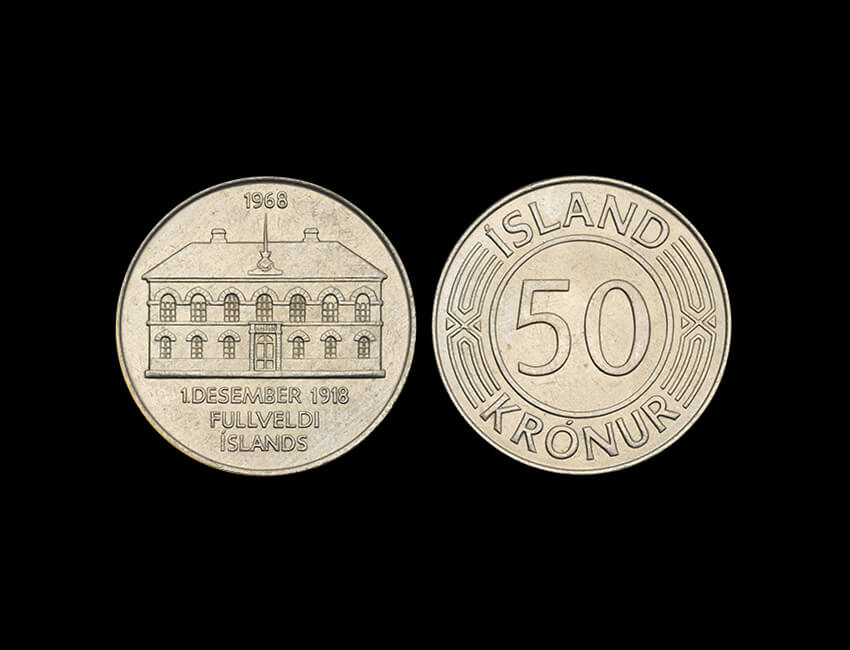 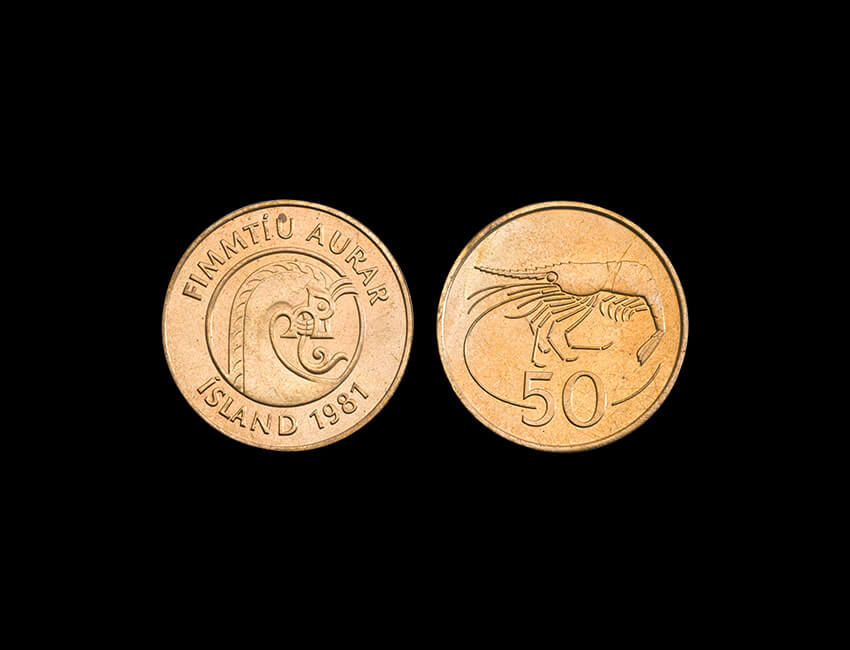 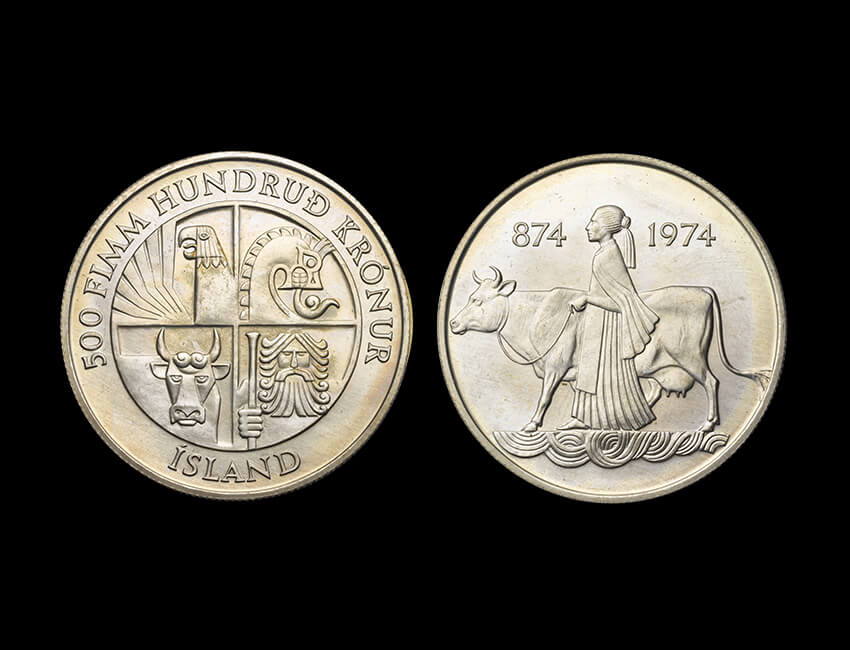 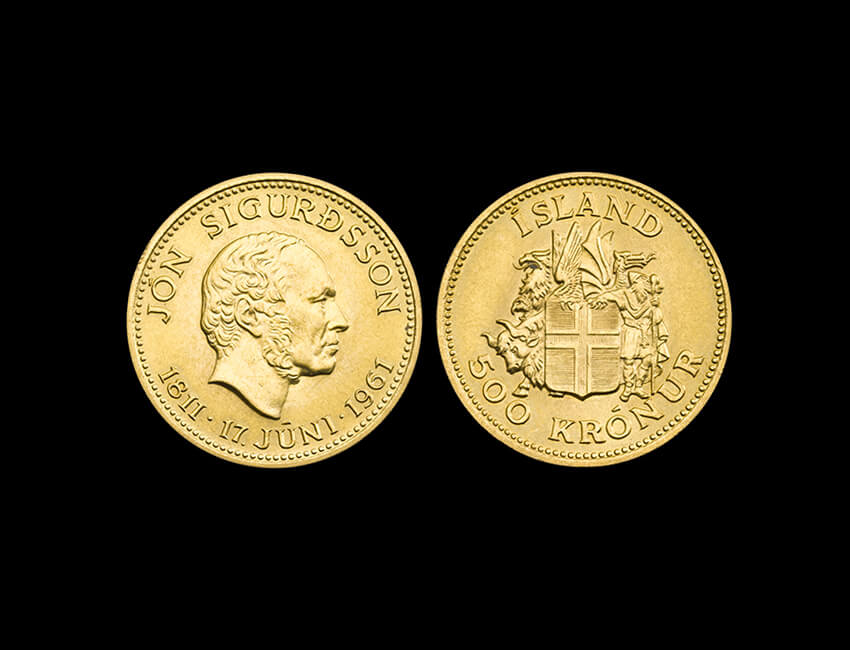 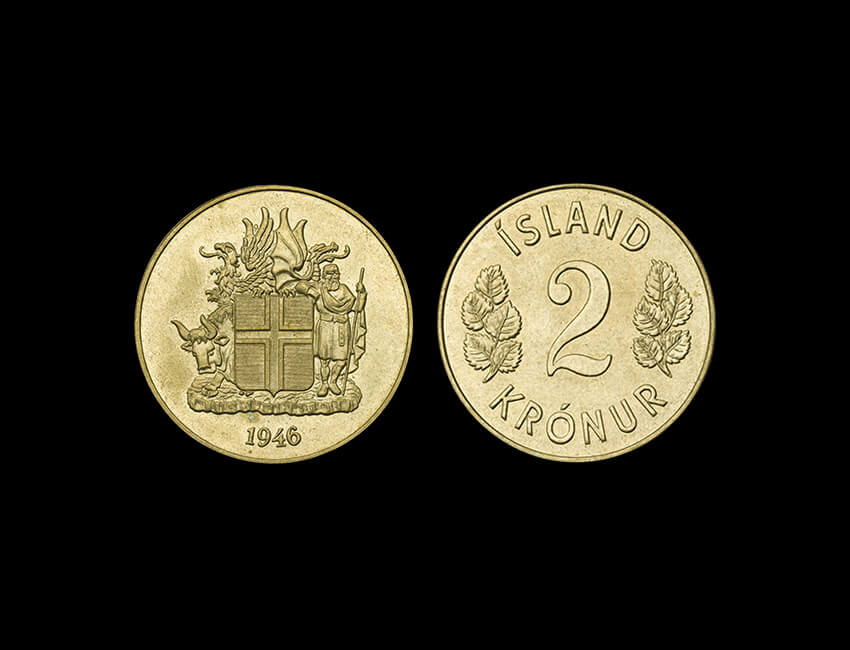 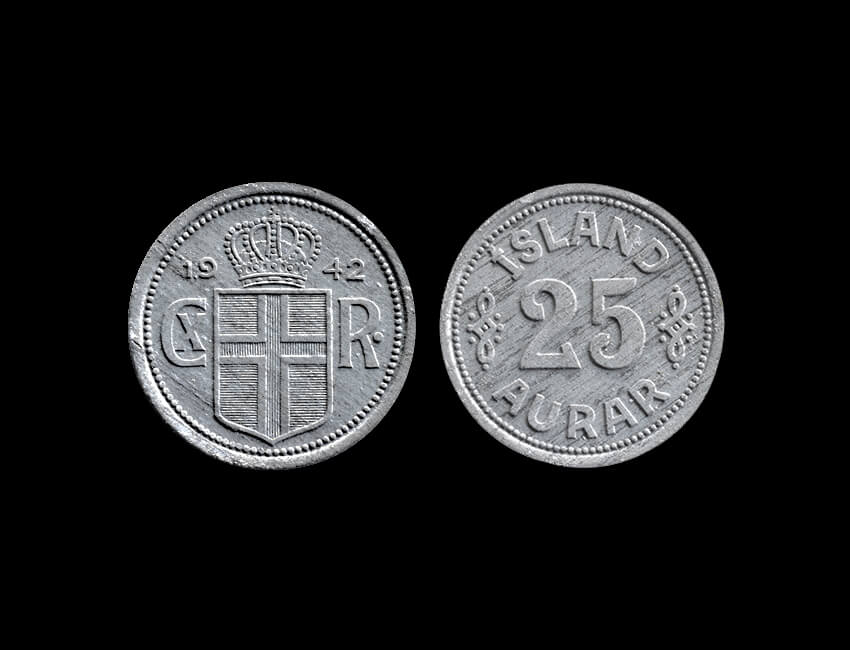 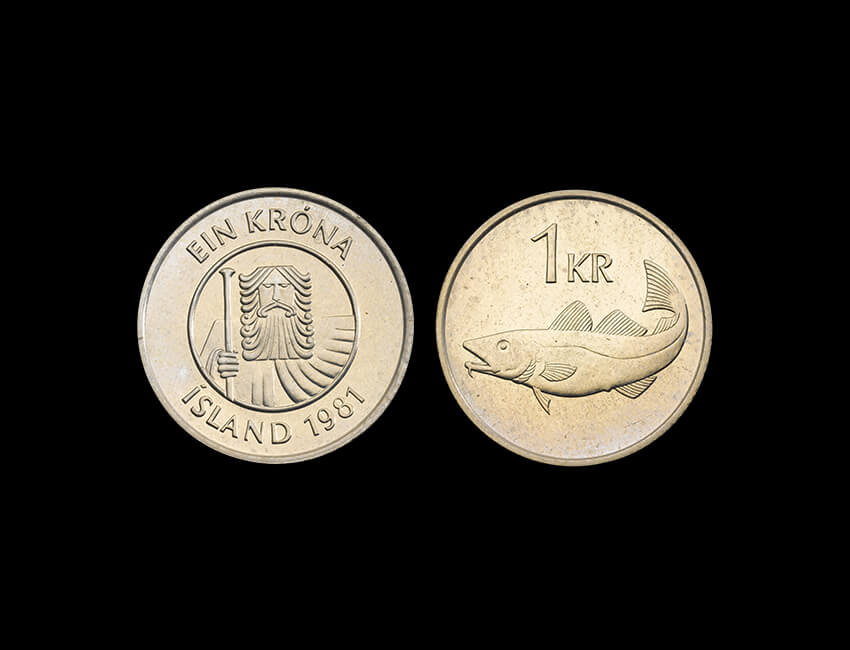 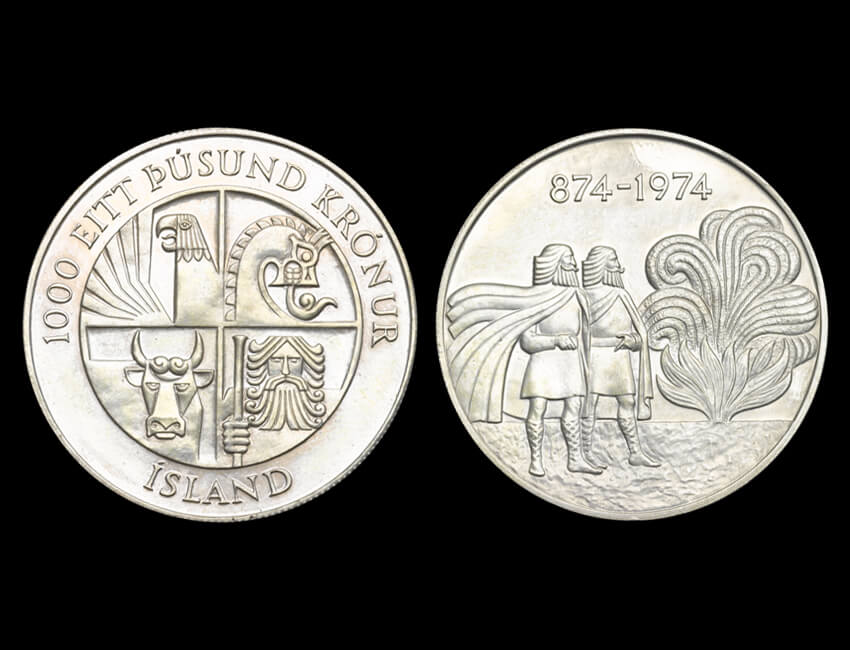 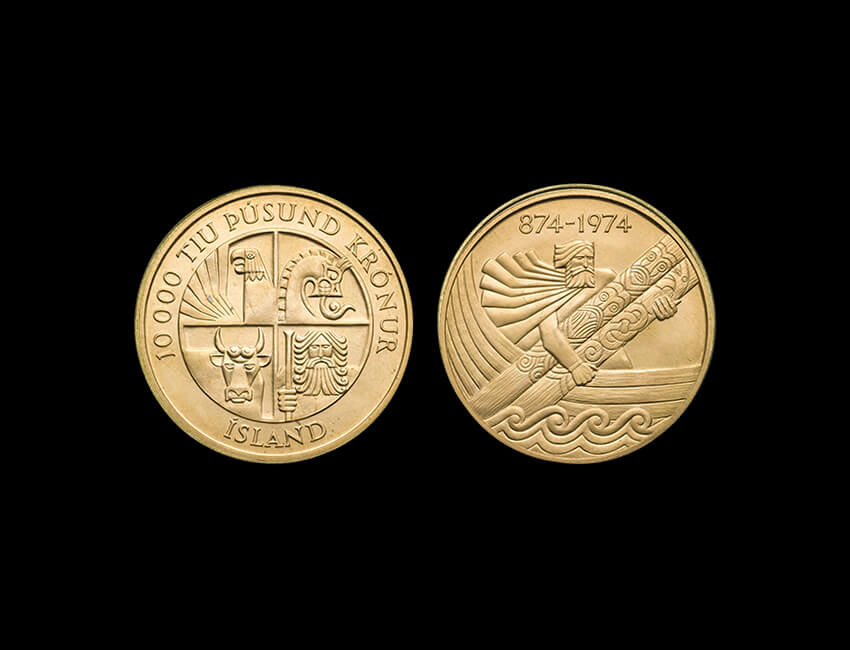