The Committee was established in 1922 with the personal approval of George V. It exists to raise the standard of numismatic and medallic art in Britain and is expected to ensure that designs meet high standards of art, decency and good taste. Its purpose is to advise government departments, and ultimately the Queen, on matters of design with respect to coins, medals, seals and decorations. In relation to the United Kingdom coinage this entails seeking the approval of the Chancellor of the Exchequer, whereas in relation to official medals, seals and decorations, it involves working with representatives of the sponsoring government departments concerned and making recommendations through the Cabinet Office. 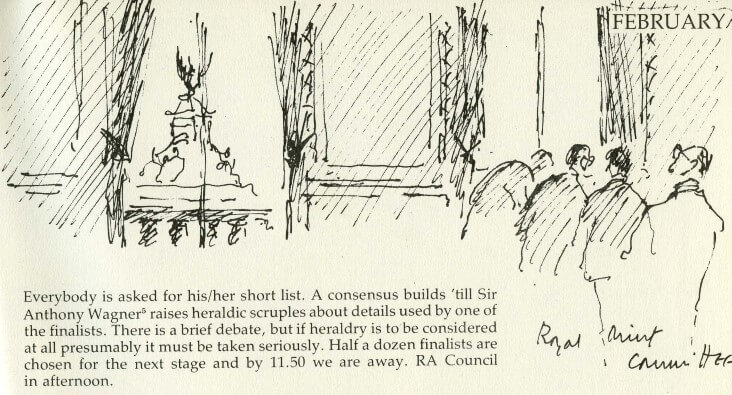 Sketch of a committee meeting at Buckingham Palace by Sir Hugh Casson, member of the Committee, 1971-95

For any new United Kingdom coin a competition is normally organised by the Committee which may be either open to the public or, more usually, limited to a number of specialist artists. The Committee has a role in offering advice on which artists should be invited to prepare designs. The entries are submitted to the Committee which will judge each design on its merits, including whether they uphold the necessary high standards of art, decency and good taste. Assessments are made respecting how well the design brief has been interpreted, the technical requirements of a design that will translate well to a struck coin, standards of creativity, use of lettering, balance of overall composition and competence of draughtsmanship.

The Committee will then recommend a design to the Chancellor including an explanation as to why it has been chosen. The final design approved by the Chancellor will then be sent to the Queen for royal approval.

In September 2009 the role of the Committee was widened through the establishment of a Sub-Committee on the Selection of Themes for United Kingdom Coins. The role of the Sub-Committee is to consider proposals on themes for new coins put forward by the Royal Mint and to make recommendations to the Chancellor who in turn will seek royal approval.

The purpose of the Sub-Committee is to ensure that the recommended short list of themes reflects the most significant or appropriate events for commemoration, to ensure that the Chancellor can have confidence that the public interest will be fully reflected in the coin theme proposals to be put to him and that a range of experts will have been involved in their selection.

The Sub-Committee will be asked either to agree with the Royal Mint’s choices or, where members feel the proposed set of themes does not adequately reflect the most significant or appropriate events for commemoration, propose an amended set of recommended themes.

The Sub-Committee will provide its recommendations to the Chancellor and, following his approval, it will report to the full Committee on the outcome.

The composition of the Sub-Committee provides expertise at the highest level in art, design, history, general cultural knowledge and the commercial objectives of the Royal Mint. The current membership includes the Chairman and at least two members of the Royal Mint Advisory Committee, a representative of HM Treasury and the Director of Commemorative Coin at the Royal Mint. 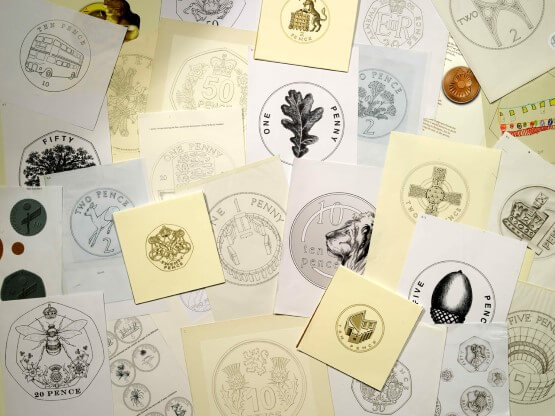 For these purposes, an official medal, seal or decoration is one which has been instigated by a government department and/or approved by the Queen and is more often than not backed by a Royal Warrant.

Government departments on occasion sponsor the issue of medals, emblems or badges that are not strictly official as defined above. In these instances it is a matter of judgement for the departments concerned whether they choose to seek the advice of the Committee. The degree to which such issues are likely to have a high public profile will be an important consideration in determining the nature and extent of consultation with the Committee.

For any new official medal a design competition similar to that for a coin is organised by the Committee, in this case almost always limited to a number of specialist artists. With medals, however, the Committee ensures that the design objectives of the sponsoring department are met in full and, to this end, a representative of the department concerned, and often of the Cabinet Office, will be in attendance at meetings.

The recommended design is passed to the sponsoring department who will then obtain official approval through the Cabinet Office and Buckingham Palace.

Find out more about the work of the Royal Mint Advisory Committee.

Our Collections Team has been working on some exciting additions to our digitisation project, and we are pleased to present the papers from the first 200 meetings of the Royal Mint Advisory Committee, from 1922 to 1992. Covering matters of design relating to coins, medals, seals and decorations, these records offer a detailed insight into the design process behind some of the most iconic numismatic designs of the last century. They feature sketches and artwork of those designs not selected for progression, alongside detailed notes on how the chosen artist’s work was developed all the way from concept to coin.

Paget ranks as one of the greatest of the Royal Mint’s artists during the first half of the 20th century.

This section of the collection comprises artists’ drawings and plaster models for coins and medals.