Since at least 1282, coins produced by the Royal Mint have been independently checked in a proceeding known as the Trial of the Pyx, which takes its name from the pyx or box in which were kept the sample coins set aside for testing. 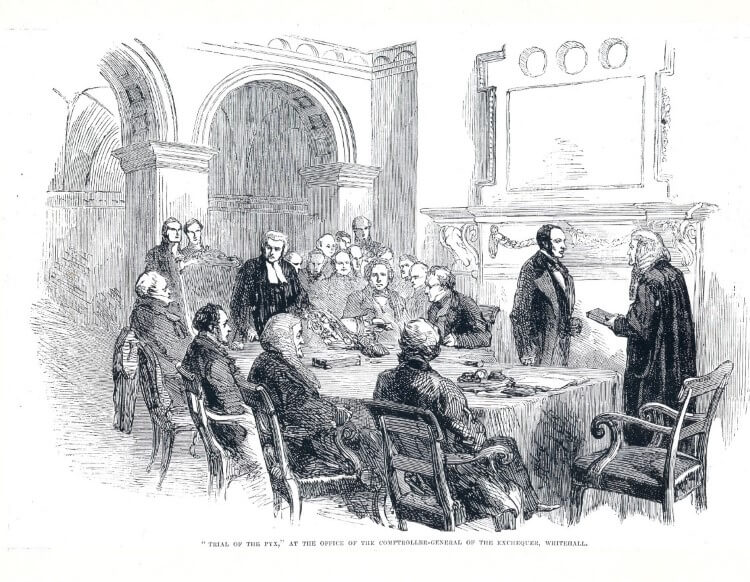 Today the Trial consists of an examination by a jury entirely independent of the Royal Mint to ascertain that the precious metal and cupro-nickel coins made by the Royal Mint are of the proper weight, diameter and composition required by law. The Trial is convened annually and carried out by the Goldsmiths’ Company of the City of London, who provide a jury of Freemen of the Company. The jury is sworn in by the Queen’s Remembrancer, a senior judge, who presides over the Trial in accordance with directions issued by the Treasury.

For the purpose of the Trial sample coins in the proportion specified by law are submitted by the Royal Mint. Officers of the National Weights & Measures Laboratory produce the standard trial plates and the weights against which the sample coins will be compared for accuracy. The jury first check the sample coins to see that the correct number are present, and then weigh the coins in bulk, as well as selected individual specimens, to ascertain that the weight of the coins is within the remedy or tolerance allowed by law. Assays are then carried out to test accurately the fineness or composition of the metal by comparison with the standard trial plates, and to ensure that it is within the prescribed tolerance. The diameters of selected coins are also measured to ascertain whether or not they are within the tolerances allowed by law.

After an interval of some two or three months the verdict of the jury is delivered to the Queen's Remembrancer in the presence of the Master of the Royal Mint or his deputy.

The video below was filmed throughout the trial and verdict of the 2013 Trial of the Pyx. Learn about the trial and what it means for the coins in our change. Discover the history of the trial, its purpose, and what the 2013/14 trial meant to the members of Royal Mint staff who attended.

It was not until the reign of Henry VIII that a gold coin known as a crown was introduced.

The Museum is home to a spectacular series of gold and silver trial plates dating from 1477.