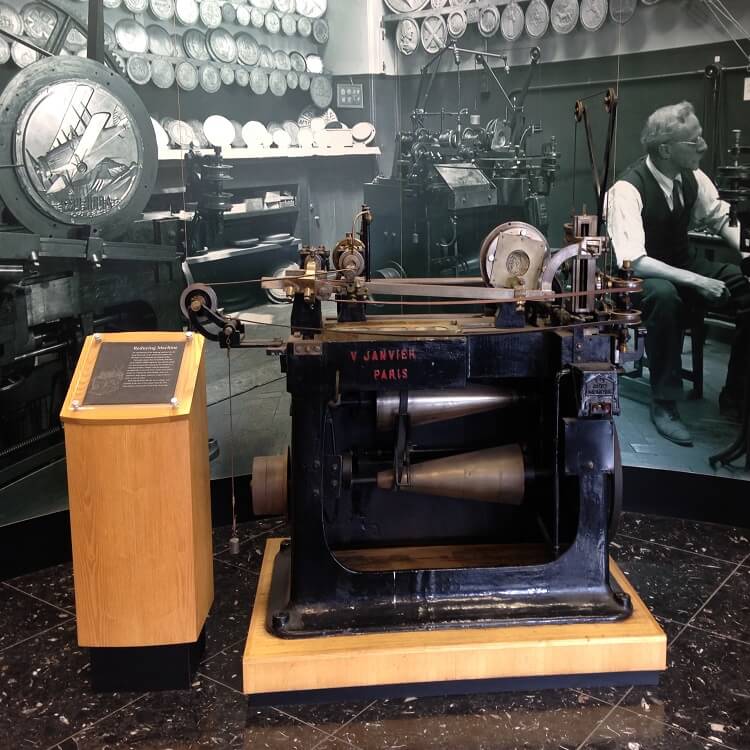 The Museum's Janvier reducing machine on display at Llantrisant

In the Museum we have many objects that tell the story of coin and medal production. Some of the most fascinating are the reducing machines whose intricate mechanisms were once integral to the process of minting.

The Museum has several examples of reducing machines; the earliest, currently on loan to the British Museum, was built in the early 19th century and is said to have belonged to William Wyon, Chief engraver at the Royal Mint from 1828 to 1851. A second machine built in 1850, pictured below, is currently on display at the Royal Mint site. Both of these machines were operated by foot treadle which involved many hours of intensive labour. In comparison, the Museum’s Janvier machine, built in 1905, is both automatic and far more reliable than the earlier versions.

For more information on the role of reducing machines in coin and medal production see our Collection in Context blog post.

Several years ago, as part of the Museum’s planned move, the Janvier reducing machine was removed from display and brought back to its former glory by Ken Stoat, who was responsible for the operation and maintenance of all the reducing machines at the Royal Mint before his retirement. While Ken was carrying out the restoration we took the opportunity to find out more about his experiences and his admiration for the Janvier Machines he worked with for more than 30 years. 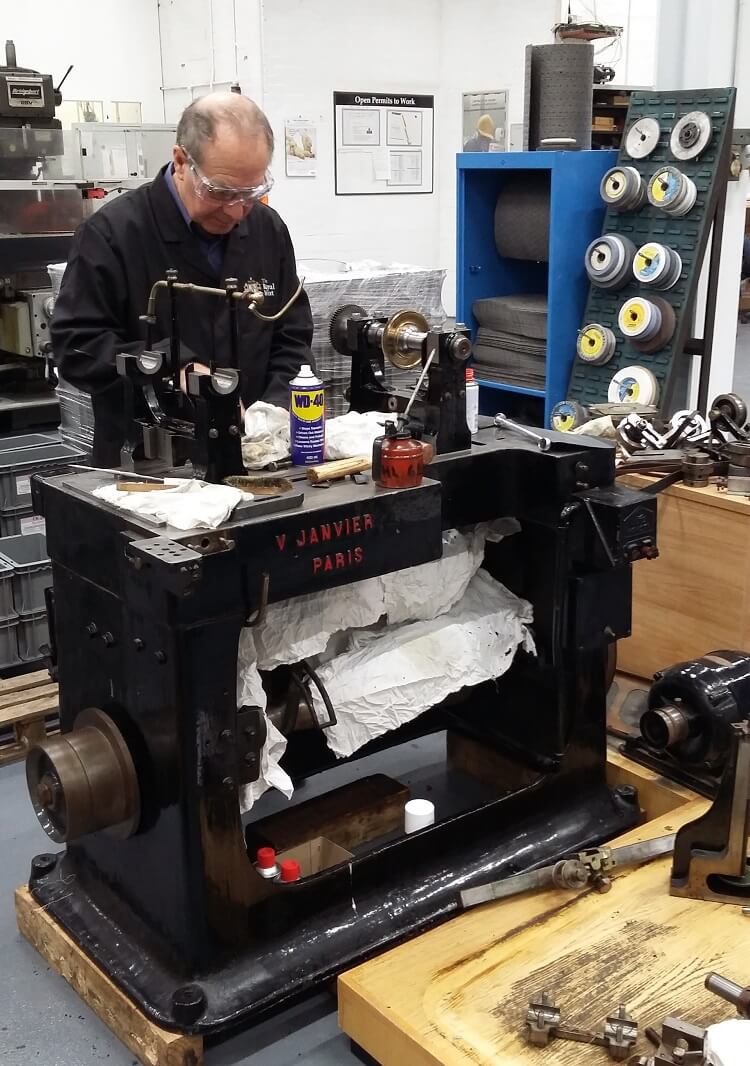 Ken started his career in London making scientific instruments but by the mid 1960’s he was looking for a change. He saw an advert for a bench fitter’s job at the Royal Mint, located at that time at Tower Hill in central London. After approaching the foreman in the tool room he was given a week’s trial. The foreman must have been impressed because at the end of the week Ken was taken on. He officially joined the Royal Mint on 28 November 1966. 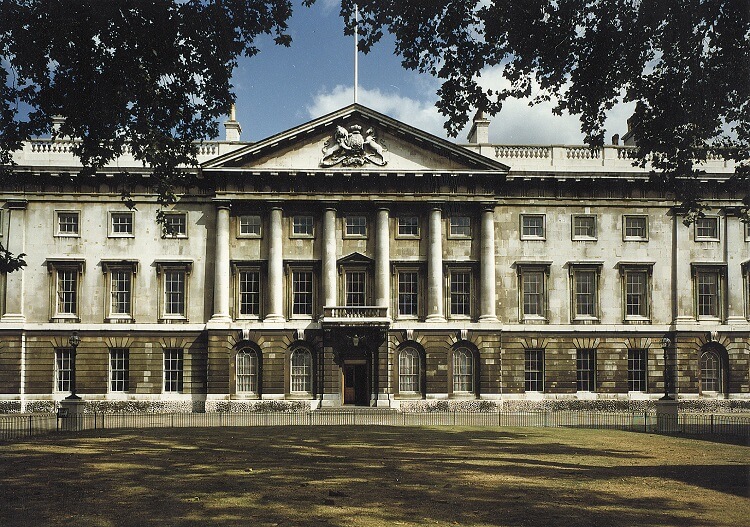 Several months after Ken began working for the Royal Mint a position became available in the reducing room, as one of the two workers there was leaving to help set up the private Franklin Mint in the United States. At the time Ken was in his early 20’s and eager to learn. In addition it was a specialised job and offered a better salary. He moved to the reducing room and remained there for the rest of his career.

The reducing room was located on the first floor of the Tower Hill building in order to avoid extremely loud sounds and vibrations coming from other production areas. When entering the large and bright reducing room from the factory floor, where machinery would produce a cacophony of sound, the peaceful quiet was a total contrast. Vibrations and other loud disturbances could ruin days of work by causing the machine’s tracer or cutting tool to jump. When the shifts at the factory changed the reduction process could be affected by the sudden activation of all the machines in the building and visitors were even warned to close the reducing room door gently. The Janvier machine has a solid cast iron base in order to minimise these vibrations but it was important to act with care around a working machine. 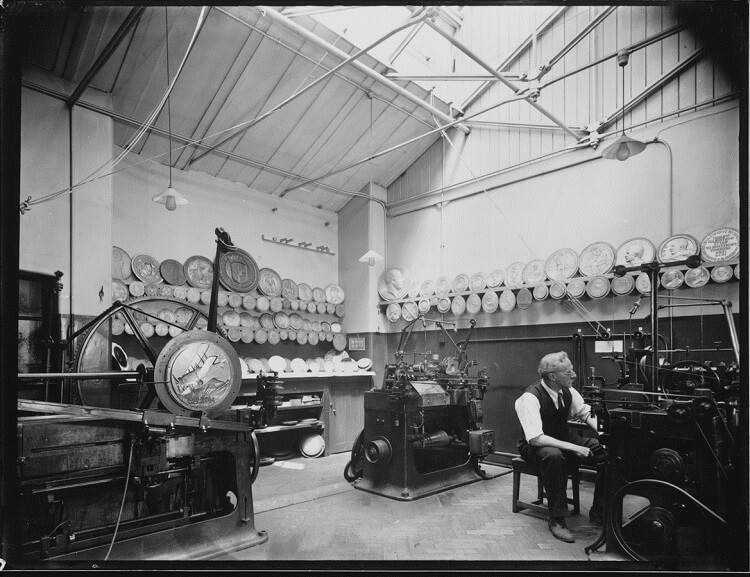 Ken remembers the Janvier machines at Tower Hill fondly. There were five machines in the large and bright reducing room when he started. Four were Janviers, the other was a copy which was not nearly as reliable as the others. He maintains that, in its day, technology never got any better than Janvier. No other company ever found the ‘secret ingredient’ to better its design.

Ken recalls that the length of time it took to produce a coin-sized tool from an electrotype depended on what was required. 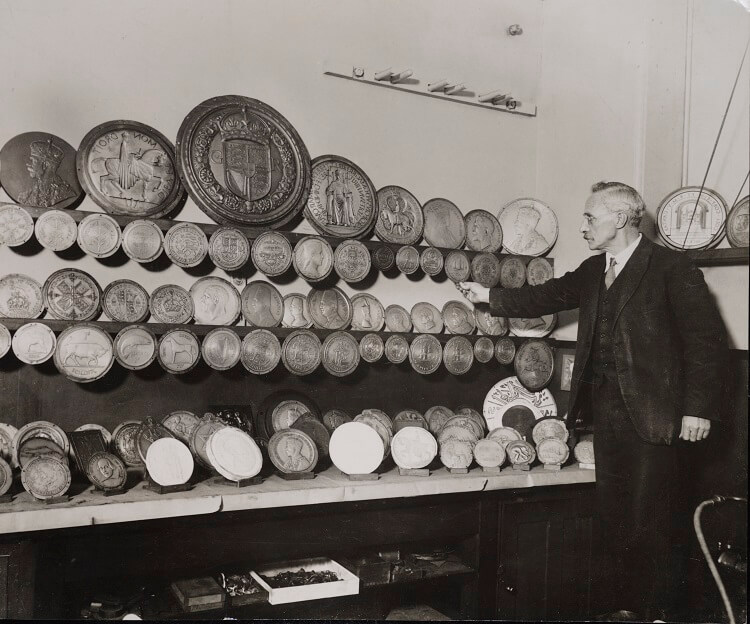 Electrotypes in the reducing room at Tower Hill 1933

In general, the first day of a job would be used to sort out the size and form of cutting tools needed and to embed the electrotype in wax for mounting onto the machine. The second day would be used to set up for the first ‘rough’ cut of the tool which would take approximately twelve hours. The machine could be left overnight to do this, automatically switching off as soon as the tool reached the right diameter. On the third day, fine cutters would be manufactured and by mid-afternoon the machine would be set up ready for the final ‘fine’ cut, which could take up to two days. By the fifth day the job was complete but the finished punch would not be removed from the machine until it had been inspected and approved by the Chief Engraver. Only he could declare it ready for use in the next stage of production. 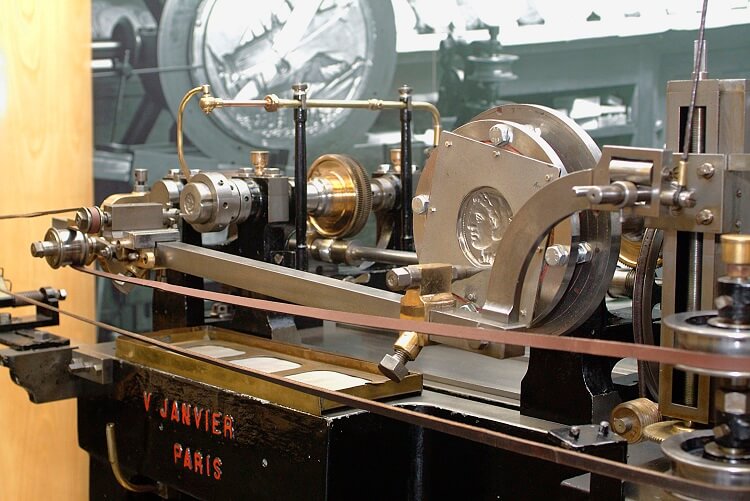 The tracer and cutting mechanisms on the Janvier reducing machine

From Tower Hill to Llantrisant

In 1966 the Government announced that it would be adopting a new decimal currency system. Restraints on space at Tower Hill meant that construction of a new Mint would be essential to ensure smooth production of the new coinage alongside overseas orders. Work on the new site at Llantrisant began in 1967 and by 1968 the first coins were being struck in South Wales.

Ken remembers the process of bringing the reducing room equipment to Llantrisant as ‘a gradual thing’. At the beginning of the move in 1968 he was only allowed to bring one machine to Wales. The rest followed over the period of a year, as work at Tower Hill allowed. In the first phase of the move the reducing machine was in a tiny temporary room with no windows. Work had to be carried out under artificial light which made it difficult to work on small tools and cutters. Later, a larger, purpose built reducing room was created with big windows for natural light. Ken remembers it as ‘paradise’ in comparison. 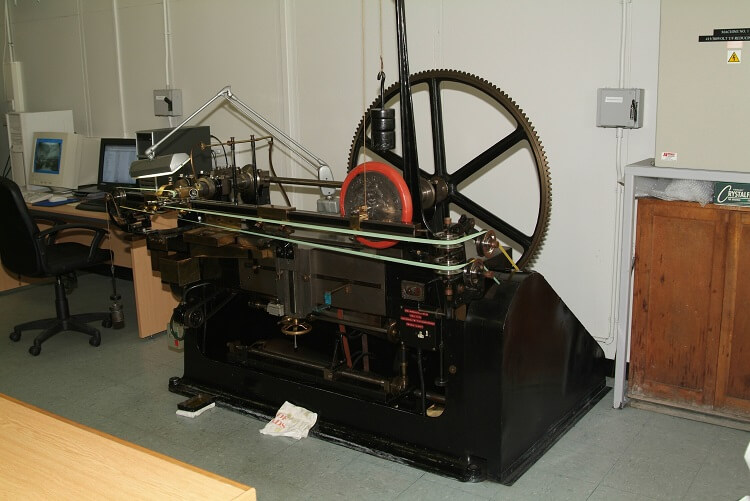 Eventually, despite the efficiency of the automatic Janvier machines, and the skill of experienced craftsmen like Ken, it was only a matter of time before the reduction process was updated. By the time he retired Ken was working with computerised machines, which are faster and whose digital imaging technology means there is no need for an electrotype. In the later years of his career, Ken remembers increasing numbers of visitors coming to see the reducing room. He would clean the remaining Janvier machine and set it to work along with the newer equipment so the visitors could see the different stages of technology historically used in the reduction process. 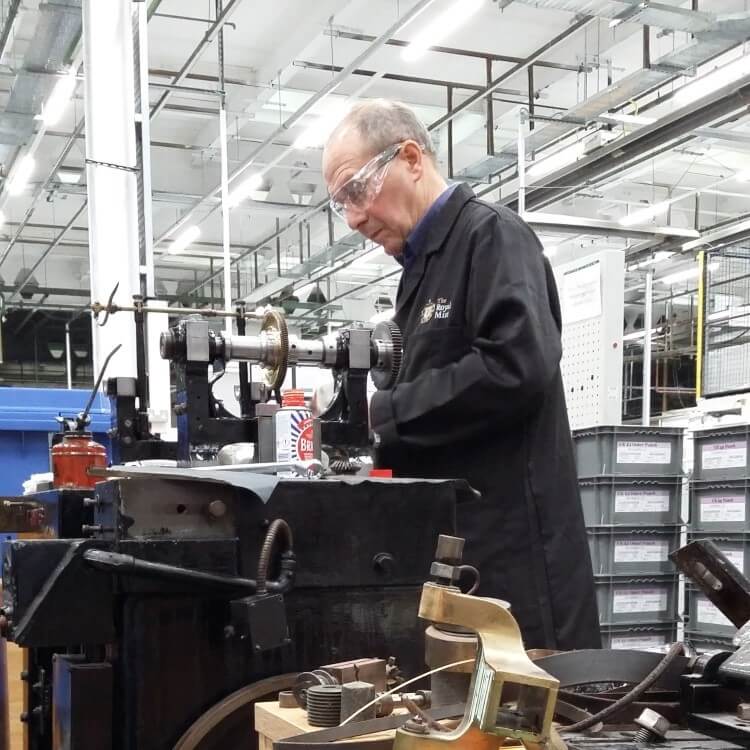 Ken speaks so passionately and with such authority on this subject it is easy to see why his part of the Royal Mint tour was popular with visitors. We are very grateful that he has used his years of experience to restore the Janvier so we can once again use this fascinating machine to educate people about the production of coins and medals at the Royal Mint.