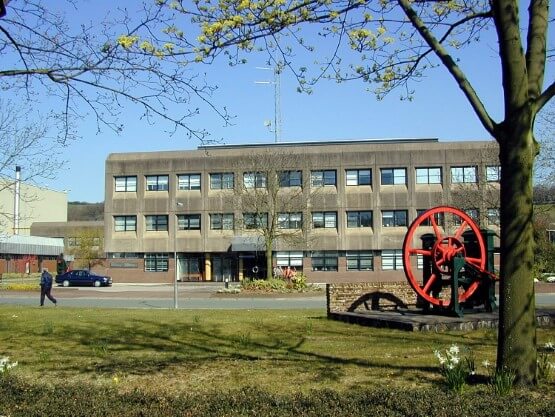 The need to rebuild The Royal Mint had been recognised in the 1950s. A major programme of renovations at Tower Hill had been announced in 1955, but this had been delayed by economic circumstances and the view had increasingly gained ground that it would be more satisfactory to build an entirely new mint on a less confined site. Matters were brought to a head by the government's decision, announced in 1966, to adopt a decimal currency system, because it required the Mint to strike hundreds of millions of decimal coins in readiness for decimalisation on 15 February 1971. At the same time overseas customers could not be neglected, and the combined burden of export and decimal work made a new Mint essential. In accordance with government policy of moving industry away from the capital, sites were considered in development areas such as the North East and Merseyside, but finally, in April 1967, it was announced that a new Royal Mint would be built in South Wales.

The location chosen was Llantrisant, ten miles or so to the north-west of Cardiff, set in rolling-green countryside on the edge of the Rhondda valley. As a local Cardiff MP, James Callaghan, who was Chancellor of the Exchequer when the decision was made, and therefore Master of the Mint, years later expressed no small amount of pride in having so prestigious an organisation as The Royal Mint located in South Wales. It was a welcome boost to the local economy and the Mint's continued presence here has acted as a magnet for other businesses to the area.

Work began in August 1967 on the construction of two large concrete-clad buildings, one for the treatment of blanks and the other for the striking of those blanks. This first phase was opened by the Queen in December 1968, when she switched on the coining presses to begin production of decimal bronze coins. During 1969 the new Mint, with its modern facilities for the bulk handling of blanks and the automatic feeding of coining presses, achieved weekly rates of output in excess of 50 million coins, or twice as much in a single week as had been produced in a year a century earlier. Blanks were supplied from Tower Hill as well as by outside contractors and, as planned, the Llantrisant site was responsible for the bulk of the stockpile of decimal bronze coins.

After the decimal change-over had been successfully resolved - a credit to the Mint and its staff - a second phase of building work was undertaken at Llantrisant. Its main feature was a large Melting, Rolling and Blanking unit, in which was installed one of the most up-to-date foundries in the world for the continuous casting of non-ferrous metals. Another substantial building provided accommodation for the Engraving, Die and Assay Departments and for the special section responsible for the striking of proof coins for sale to collectors. An office building and a Police Lodge were also constructed, and the new Mint came to occupy some 35 acres, a massive area compared to the four or so acres of the Tower Hill site.

Until the second phase of building at Llantrisant had been completed the Mint at Tower Hill continued in operation. After 1972, however, few coins were struck there and once the Mint in South Wales had become largely self-sufficient with the commissioning of the additional plant, production in London of blanks and coins was brought to an end. The last coin, a gold sovereign, was struck at Tower Hill with due ceremony in November 1975, by which time most of the staff had already left. In 1979 the Marketing and Sales teams, who formed most of the small remnant at Tower Hill, moved across London to offices in Victoria and finally, in 1980, the last of the employees, along with the Mint's historic numismatic collection, left London for Llantrisant, accompanied along the motorway by an armed police escort.