The coins of Edward VIII

Because of the Abdication in December 1936 no coins of Edward VIII were issued in the United Kingdom. There had, however, been time for pattern pieces to be prepared and the Royal Mint Museum contains the finest collection of such pieces in the world.

Such was the sensitivity surrounding the Abdication that for many years these patterns were locked away and not treated as part of the Museum collection; few people knew what had survived and the existence of the coins became something of a mystery even within the Royal Mint. It was not until the retirement of Sir Jack James, Deputy Master from 1957 to 1970, that a sealed cardboard box was retrieved from a safe in his office and found to contain no fewer than 49 coins of Edward VIII. On 5 November 1970 these coins were placed in the Museum and provide the core of what is listed here. 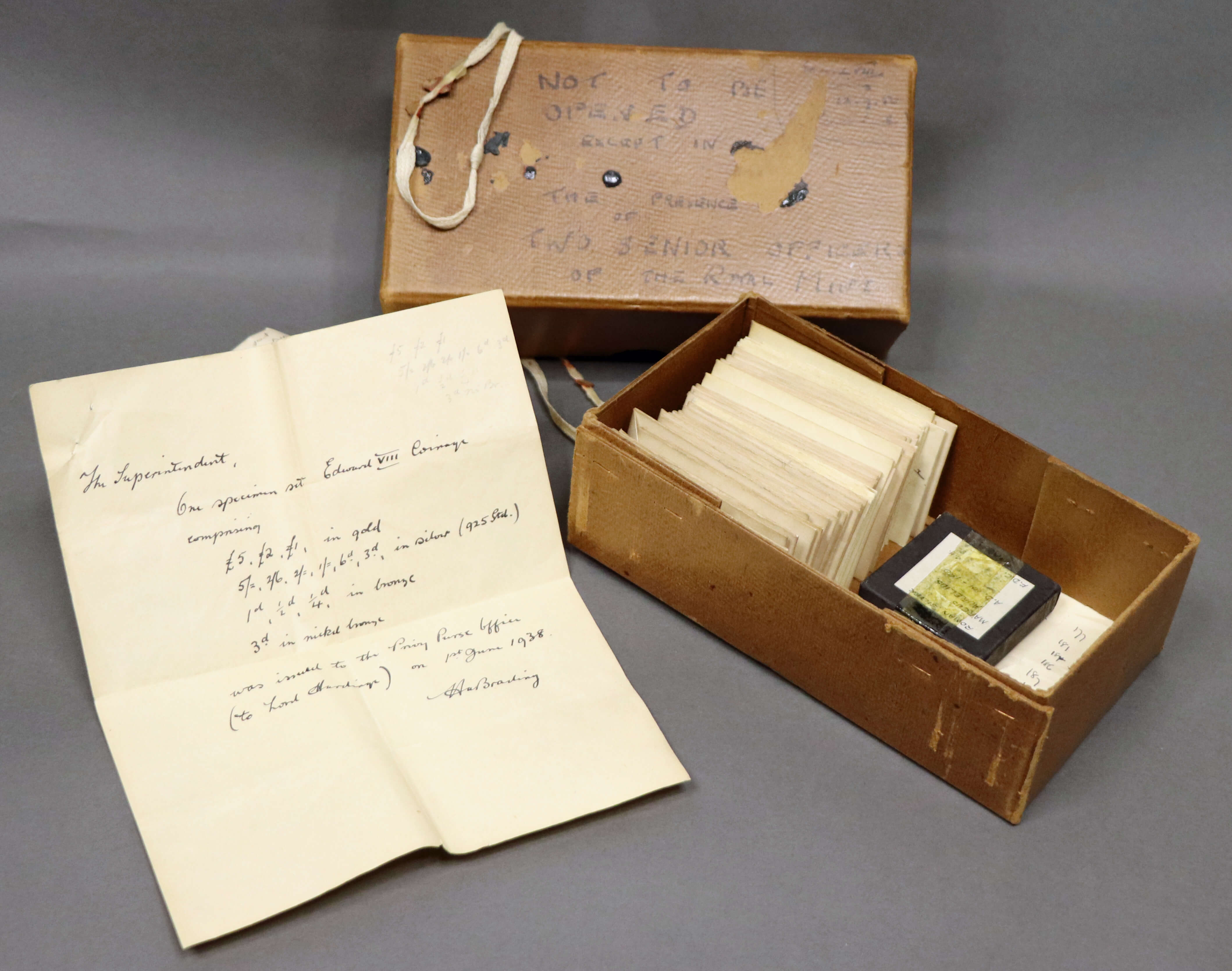 Three other specimens had in fact survived in the Mint but, as uniface reverses, had not been associated with Edward VIII. One of these, the pattern crown RMM 14, had come into the collection from the Operative Department in March 1938 but the other two, the penny RMM 52 and the halfpenny RMM 57, had found their way for some reason into the coin collection held in the Assay Department. In January 1974, with the consent of the Chemist and Assayer, Mr E. G. V. Newman, in whose office the collection was kept, the two uniface patterns were extracted for the Museum.

Just previous to this there had been a significant addition of some 20 or so rubber impressions (RMM 62-81) from surviving dies and tools for the coinage of Edward VIII. These impressions had been prepared within the Mint to illustrate the official account of The Proposed Coinage of King Edward VIII by G. P. Dyer, the Librarian and Curator. Published in 1973 following the death of the former King the previous year, the booklet contained a detailed description of what the press called ‘the coinage that never was’ and in the interests of completeness it had been thought desirable to include all designs for which dies were made in 1936. Where there were no corresponding pattern coins in the Museum, the designs were illustrated by means of rubber impressions specially taken for the purpose from the dies and these impressions were subsequently added to the collection.

Since 1974 the Museum has filled some of the gaps in its collection by the acquisition of pattern and trial coins in the saleroom or by private treaty.