by Peter Judge, Archivist, Museum on the Mound

This year marks 50 years of decimalisation in the UK. The system of Pounds, Shillings and Pence had been in place for centuries but from the 1960s the push to decimalise grew stronger within government. Part of the Government's advertising saw 15 February 1971 christened 'D Day'. To clear cheques written in old money, all banks closed five days before at 3.30pm on Wednesday 10th, then reopened for 'D Day' at 10am. 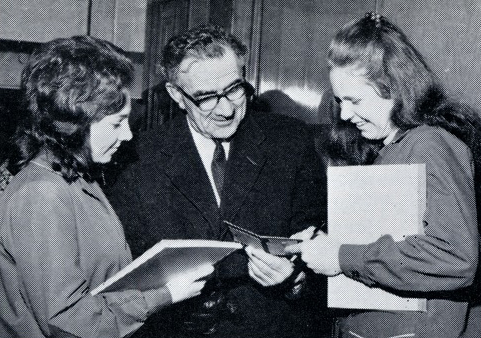 Members of the York office staff offering assistance to customers on D-Day as pictured in Yorkshire Evening Press.

From 1968, the staff at Lloyds Bank had been hard at work producing guidance, procedures, conversion tables etc. Reaction to all of this literature was mixed. Within the bank, the staff magazine, which had been curiously silent on the change, in the February 1971 issue opened with “We have, until now, deliberately avoided adding to the many millions of words written on the subject of decimalisation. Information, exhortation, advice, quizzes, all have been pouring out in such abundance from all sides that any provision of ours on these lines would have been superfluous” and begrudgingly dedicates a few lines to the topic. Customer reactions ranged from gratitude, to bewilderment, to outright fury. One unnamed customer wrote to his branch manager “Tell Mr. Lloyd I resent having the Code Napoleon imposed on me. Your customers are complaining about the reversal of the Victory won at Waterloo 20/6/1815. Please use your influence to stop this Damned Humiliation”. Complaints around the complications of the switch were obviously common, but this sense of loss of a part of cultural identity, decimalisation seen as a French-style system, also creep in quite frequently. 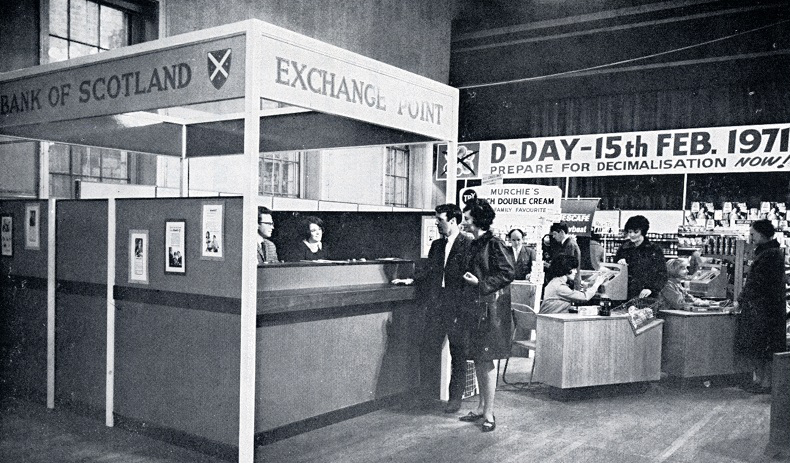 Photograph taken at an exhibition at Aberdeen Music Hall in April 1968, nearly three years before the changeover. Visitors could swap their pounds shillings and pence for decimal tokens that could be spent at the exhibition.

But it wasn’t just customers that were experiencing a sense of nostalgia around the soon to be defunct pounds, shillings and pence. A sense of wistfulness appears in an otherwise extremely dry article on the intricacies of conversion by none other than the Controller for Decimalisation, John Crawley. He writes: “Pity the Board doesn’t want us to call the 10p-piece a florin. The thing appeared in 1849 all ready for decimalisation which then seemed to be just round the corner and now we’ve got it, 120 years later, and the florin isn’t wanted after all. It was a nothing sort of coin. It never caught the imagination, like the half-crown or the sixpence. How rich we felt, handing out a half-crown. And how we still love sixpence, jolly jolly sixpence.” And so on. What hope was there of convincing the masses when there was this level of doubt at the top? 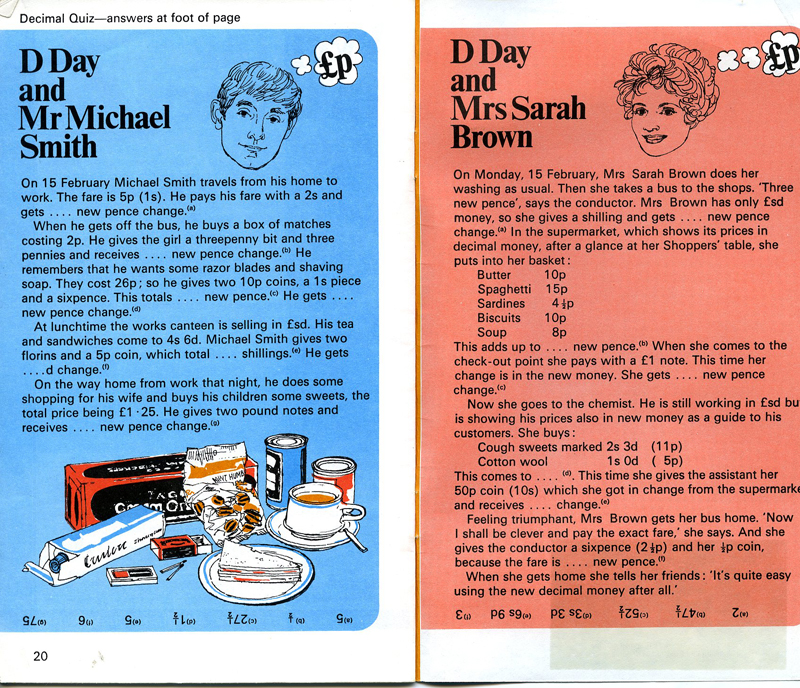 A decimal guide quiz produced in 1971.

On Monday 15 February 1971 the change was made, after three years of hard work by bank staff nationwide. In appreciation of their hard work, Head Office staff were treated to a “Decimal Disco” the following Friday. But how was the first week under the new system? It seems as though all the work in the run up paid off as the transition appears to have been remarkably smooth. All the reports from the branches, despite the usual procedural grumblings, suggest common sense and practicality on the part of the customers. Local businesses too seem to have played their part in educating their staff and customers. One cashier, operating the enquiries desk, said “either customers are shy of confessing their ignorance or else they’ve done their homework.” Overall, there seems to have been some shock at how smooth the transition was. Ironically, the first weeks of the new system may have been helped by a national postal strike that lasted until March. Despite all the misgivings in the lead up, the system stuck and we are celebrating 50 years of decimalisation in 2021. Given the success of the change, it is surprising that the shift to the metric system wasn’t as successful. Then again, “a 0.568 litre of beer” doesn’t have quite the same ring to it.

Preparing for decimalisation at Sainsbury’s Supermarkets.

For the original fifty pence of 1969 Christopher Ironside was asked to prepare an arrangement of the Royal Arms.

What is decimalisation? How many shillings in a pound? All this and more on our Learning Zone!