The Royal Mint Museum and Research

Like many collectors of my generation, an interest in numismatics was kindled as a young boy by checking my change and saving pennies and halfpennies of each date in an era where coins of Queen Victoria were still in circulation (although rather worn!). As is often typical, collecting took something of a back seat in later life as other matters took precedence but I promised myself that numismatic research would be a major focus in retirement.

My interests lie predominantly in British and Colonial coins post the great recoinage of 1816. This vast topic seemed to me to contain many conundrums. Certain coins existed which according to Mint records ought not to exist whilst other coins were rare when all the evidence suggested they should be common. Such enigmas seemed to occur quite regularly in the gold sovereigns series and were positively endemic amongst those struck during the reign of George V. I decided to try and research some of these sovereigns together with certain colonial coins as a starting point. If articles worthy of publication ensued, so much the better.

It seemed important to begin by gaining an understanding of the process I was attempting to explore. How are coins made? Who orders them? What is the legislative framework? What controls are there over the minting process to ensure standards are met? What records are kept? Are dies and specimens of coins retained? If so, where are they and are they accessible? Although I had built up some knowledge of these matters over the years, my comprehension was not complete and I concluded that there was an obvious step to moving forwards. Get help!

It is remarkable how predisposed luminaries in our chosen field are to helping others and I have been humbled by their willingness to share their encyclopaedic knowledge. First and foremost in this regard is the Royal Mint Museum and its staff. Located within the security of the Royal Mint compound, the Museum is a separate entity with its own Board of Trustees. One of its objectives is to establish and maintain a museum and archive for the benefit of the public. This includes not only a world class coin collection but, perhaps more importantly, an unrivalled collection of coinage tools together with a Library containing correspondence, records, reports, catalogues and other historical material. Research facilities are available in the Library with Museum staff giving valuable assistance and encouragement. Staff will help identify materials relevant to a chosen topic and make these available for study. As if that was not enough, cups of tea appear with astonishing regularity! 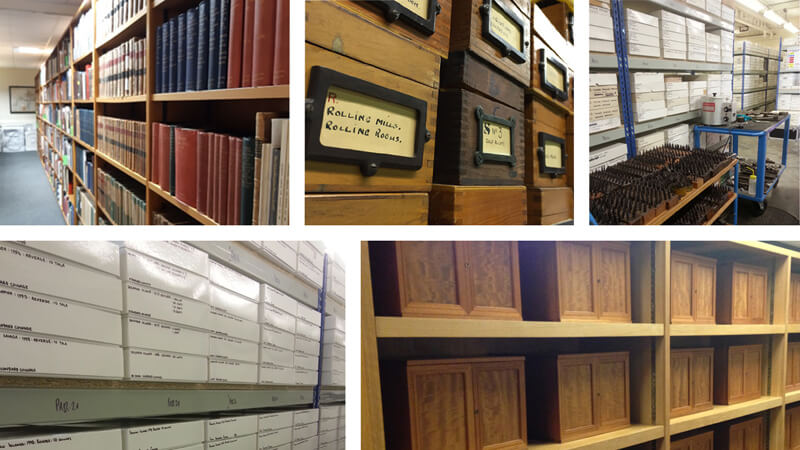 Research can sometimes prove frustrating and from time to time it fails to unlock a mystery. But when well-targeted and thorough it often leads to a ‘eureka’ moment. The resources of the Royal Mint Museum and its experienced staff are of inestimable value in this regard and working in collaboration with others is truly rewarding.

Access to the Museum is by appointment and a request can be submitted on the Museum’s website together with a brief explanation of the area of study. What are you waiting for?

Not unnaturally, perhaps, film-makers have always been keen to record footage of the Royal Mint in operation.

The Royal Mint Museum contains a valuable numismatic library of some 15,000 volumes.

Members of the Museum staff regularly deliver lectures on the history of the Royal Mint and the British coinage to a wide variety of audiences.